Lessons from the Venice Flood
November 2019 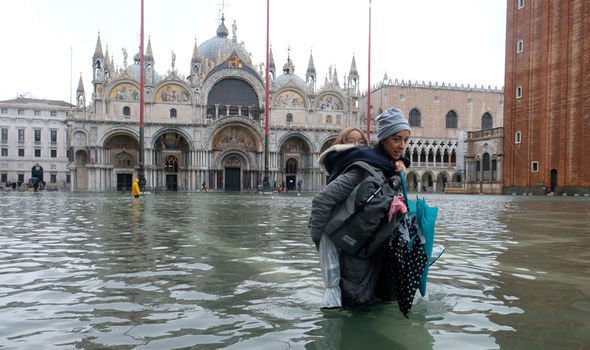 Venice is famous for its “high waters,” or Aqua Alta. The city has also been famously sinking in the past few decades. But even by its wet standards, early November has been remarkable – very unfortunately remarkable. On November 6, Venice saw its highest floodwaters since 1966: about six feet over normal high tide. Famous monuments such as La Fenice and St Mark’s were partly under water; the Aqua Alta bookstore, loved by tourists and Venetians for its habit of using bathtubs, plastic bins and even a gondola to display – and keep dry – part of its book collections, couldn’t stay above water. At the worst of it, water rose 10 inches in the span of 20 minutes. Even Venice’s one vineyard, home of the unique Doroma grape, was under threat. Then over the following week the floods returned… three times. It was the worst week of flooding in Venice since 1872, and at its peak floodwaters were the second highest ever recorded in the city. Thousand-year old St Mark’s has been previously flooded… five times. As this is written, the city remains flooded.

Unusual for sure. Notable for the fame of Venice and its monuments, visited by millions of tourists, for sure. A lesson in that more and worse flooding is coming to many famous waterside cities, as discussed in Infrastructure Ideas’ recent post on Jakarta (see Capital Punishment), again for sure. And also a lesson in what flooded Venice says about infrastructure and adaptation to climate change.

Increased flooding is already with us in many places (inland as well coastal, as reviewed in our earlier column “Floods and Infrastructure Investment”), and billions of dollars are already being spent trying to adapt. Many more billions are on the drawing board of infrastructure planners: this summer Wired reported the projected cost of protecting (just) US cities from sea level rise at over $400 Billion. Globally cost estimates are approaching the trillions of dollars.

A few things are already apparent from the billions being spent to attempt to stave off flooding. One lesson: flood barriers can be expensive – very, very expensive. New York City’s rebuilding of the Rockway Boardwalk after Hurricane Sandy cost $70 million per mile, and that was just for repairs. The Thames Barrier, in place since the 1980s to keep London dry, cost about $2 billion in today’s dollars to install. Venice – for here the story takes its major, intriguing, lesson-filled turn – yes, Venice, has spent billions to date on one of the biggest flood barriers in the world, “an underwater fortress of steel,” as the Washington Post called it. As reported by City Lab

What makes this round of destruction especially frustrating is that Venice’s massive flood defense system is almost complete. Costing almost $6.5 billion and under construction since 2003, the Venice Lagoon’s vast MOSE flood barrier is due to come into service in summer 2021. A string of 78 raiseable barriers threaded across the lagoon to block tidal surge, the MOSE project represent Venice’s moon-shot bid for survival in a warmed world.

Flood barriers are expensive. Venice’s experience also illustrates a second lesson for cities contemplating this kind of infrastructure investment: like other very large infrastructure construction projects, they take a long time to complete, and completion schedules only change in one direction. Venice’s barrier has been under construction 16 years: the original completion date was 2011, eight years ago. Had it been in schedule, Venice’s libraries, frescoes and squares would probably not be underwater today. When it will be available for use is unclear, and projected final costs reach as high $9 billion.

A third lesson is that, like with other major infrastructure construction, large amounts of funding may not wind up going where they are supposed to go. Venice’s previous mayor was arrested in 2014 and accused (never convicted) of siphoning off large amounts of money intended for the construction. A few months ago, before the floods, there were reports that sub-standard materials had been procured, and that repairs would be needed before the barrier was even used (a similar issue is currently plaguing the effort to extend the Washington DC Metrorail to Dulles Airport).

It would be good if the bad news ended there. But it doesn’t. The severity of this month’s flooding in Venice raises a fundamental question. After the billions, when the barrier is finally complete, how long will it last? A couple of decades?

Infrastructure planners and policy-makers in cities worldwide will be looking at many more billions of dollars in infrastructure spending to adapt to climate change-induced coastal flooding. Venice’s lessons indicate this infrastructure will require finding a lot of capital – some cities will find it, others will need to turn to national governments or the private sector, in public-private partnerships — to find the money. The lessons also indicate that planning, and construction, need to start sooner rather than later. Floods driven by sea-level rise and extreme weather events are rapidly increasing in frequency and severity, and every new projection shows problems coming sooner than the previous projections. Venice shows that flood barriers are not easy or quick to put in place. Venice also shows that spending controls and corruption prevention efforts will be important – with a lot of money comes a lot of temptation.

There are, of course, alternatives. Many cities are discovering the importance of smaller-budget “green infrastructure” efforts as part of their adaptation plans. Expanding rather than shrinking planted, permeable surfaces, preserving wetlands and other natural water catchment areas, green roofs and many other approaches can help reduce the incidence and impact of flooding. These approaches have the advantage of reducing the need for multi-billion dollar, probably delayed and more expensive than planned, possibly of rapid obsolescence, highly-engineered infrastructure investments. To a point. This would not have been likely to affect Venice’s situation much, though for certain cities the impact might be large.

And then there is moving. Indonesia is taking that route with Jakarta (sort of). Even culturally and historically important buildings sometime get moved. I once saw the Piva Monastery, in Montenegro: a 16th century church with remarkable frescoes, it was originally built in the valley of the Piva River, then relocated – stone by stone – in the 1970s during the construction of a reservoir for a hydroelectric complex. Adapting to flooding, in this case, intentional.

View all posts by infrastructureideas

One thought on “Lessons from the Venice Floods”